Last week in Part 1 of our MATS Plan Revisited report, we looked at connecting Adelaide’s new maritime defence precinct with the northern Adelaide plains via a new gateway bridge over the Port River. An industry sector this size we said was going to need a massive amount of defence procurement support, including manufacturing, commercial, retail, education, housing, health, and other professional services. In Part 2 of our proposal, we connect these support industries with long-haul freight infrastructure.

One thing is for sure – there will be a lot more freight and a lot more heavy vehicles on our roads as a result of this announcement.

This has become an all too familiar news headline in Adelaide.

My first project when I began working at the SA Highways Dept in 1969 was the new SE Freeway. To be fair to the government of the day, when it designed the freeway, it did not expect the level of residential development to take place that has occurred since. The Adelaide Hills has become one of the fastest growing urban areas in the State and commuter traffic on the SE Freeway has increased exponentially. Long-haul freight transport has become incompatible with that level of commuter traffic. Truck drivers dislike the current SE Freeway situation as much as commuters.

A solution is available. A solution that takes trucks and semi-trailers off the freeway, off Portrush Road, off Hampstead Road, off Grand Junction Road and will get freight to the shipyards and new northern precinct quicker, safer and cheaper. 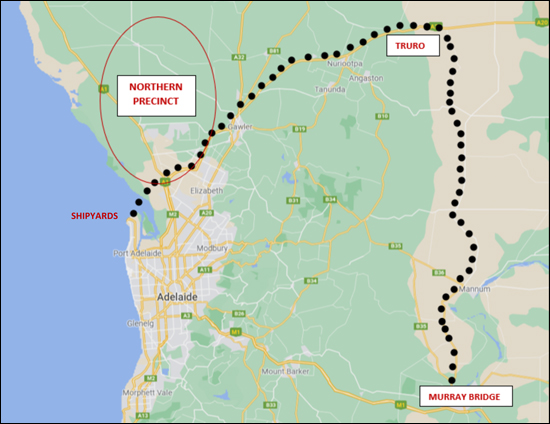 While adding approximately 70 kms to the overall journey – less than 10% of the distance from Melbourne – this non-stop route would not increase the journey-time. Adelaide’s suburban road congestion and approximately 30 sets of traffic lights between the Tollgate and Port Adelaide reduces freight transport to a snail’s pace.

According to the Bureau of Infrastructure, Transport and Regional Economics (Report No 148), the cost of building new highways in Australia is approximately $5m per lane per kilometre. A new 90 km four-lane Murray Bridge – Truro highway would therefore cost around $2bn. The safety benefits of such a project however would be incalculable and the cost of building the road would be recouped through increased productivity, fewer accidents and less suburban road maintenance.

To summarise these two MATS Plan Revisited reports, the recent nuclear submarine announcement has changed everything.

This once-in-a-lifetime opportunity to reset the State will deliver tens of thousands of direct and indirect jobs – significantly making up for the loss of Holden’s car manufacturing plant.

The new maritime defence project is a $100bn endeavour spread over the next 30+ years. Again, to put things into perspective, spending a small portion of that amount to ensure the project works properly makes good sense. A new gateway bridge and a new Murray Bridge to Truro connection, should be included in the overall cost of the maritime defence project.

As stated in Part 1 of this proposal, SA has been blessed with two great infrastructure visionaries in (former Premier) Tom Playford and (former Commissioner of Highways) Keith Johinke. Perhaps we could name the above infrastructure projects after each of them.