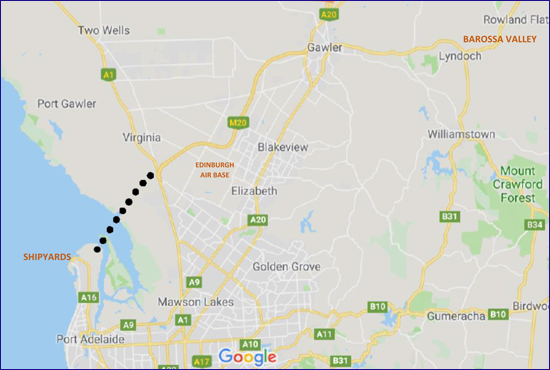 Without doubt, South Australia’s biggest ever public policy failure was the abandonment in 1970 of the MATS Plan (Metropolitan Adelaide Transport Study). The MATS Plan was a world-class road network for Adelaide’s future transport needs servicing a vibrant, emerging city. As a result of that ill-fated decision 50 years ago, SA has suffered incalculable cost, congestion and inefficiency due to its inadequate road system.

At that time, I was working for the SA Highways Department as a Laboratory Technician in the Department’s Materials, Research & Testing Laboratories at Northfield. Our then Commissioner Keith Johinke and all his staff were at the forefront of road transport planning and innovation. The excitement was palpable. Then came a change of government and the announcement that the MATS Plan was to be cancelled. It was an insane decision. All the land for the new road corridors had been acquired and the project was ready to go. So distressed was Commissioner Johinke by this announcement, he refused to sign the papers for the project’s cancellation, leaving it to an underling to carry out the Minister’s orders. The Department never recovered. Nor did Adelaide’s road transport system. I left the Department 5 years later to go into the private sector as did many others. In the 1980s the Department merged with a couple of other government departments and changed its name. A sad end to a once great institution.

Let’s not make that same ‘future planning’ mistake regarding the needs of the new submarine project which has just been announced. An industry sector this size is going to need a massive amount of support industries, including manufacturing, commercial, retail, education, housing, health, and other professional services.

In 1955, another great South Australian visionary, Sir Tom Playford, oversaw the growth and development of SA identifying that one key element for successful growth – cheap land.

The support industries for SA’s new maritime sector will need two things – affordable land, and easy ‘MATS Plan’ style access to the shipyards. Do not underestimate the importance of transport access.

Adelaide’s north can provide the land, and a new world-class gateway bridge over the Port River can connect the naval precinct with the northern Adelaide plains. Such a bridge and road system – perhaps even a rail line down the middle – would provide essential access to housing, supply chains and tourism opportunities – not to mention a ten-minute drive from the Edinburgh military air base.

The cramped suburbs around Port Adelaide are already under unsustainable pressure. Grand Junction Road is at maximum capacity. More traffic congestion, air pollution, the destruction of bio-diversity (bulldozing tree-lined streets and low-density housing) or increasing pressure on electricity, water, sewerage, or stormwater infrastructure, in other words more urban densification, would be a disaster.

One thing is certain, the new naval industry will need support systems. We don’t want to be spending countless billions of dollars retrofitting like South Road or the Southern Expressway debacle.

The Federal Government has given South Australia a new multi-billion industry. The SA State Government now needs to respond by opening up Adelaide’s north to supply this industry. Over the next 30 years tens of thousands of direct and indirect jobs are there for the taking.

In 2013, I was elected to parliament on a platform of “every family, a job and a house”. If every family had a job and owned a house, I argued, the benefits to the state and the nation would be great indeed. Clearly, a lot of people agreed with me.

Adelaide as the new maritime defence industry capital of Australia has the opportunity to provide ‘every family with a job and a house’. Let’s not blow it.