A number of years ago I was building a house at Magill in Adelaide’s east when one of our bricklayers arrived on site with his bull terrier dog. Bricklayers always preferred bull terriers as pets because if a brick accidently fell on the dog’s head, the dog didn’t feel it and in fact thought it was a game and waited for more bricks to be dropped.

At the Magill site, the galvanised iron fence between the building site we were working on and the property next door had about a 75mm (3 inch) hole in it through which the neighbour’s spaniel would regularly insert its nose to investigate the new building activity.

When the bull terrier arrived on the scene, however, the spaniel was far from impressed and began barking violently at the impertinent interloper. The bull terrier nonchalantly responded with a swift head-butt to the fence which so startled the spaniel that it jumped backwards and cut off the end of its nose on the rough edge of the fence.

The spaniel was taken to a vet and 12 stitches were needed to repair the damage.

Being responsible for the site at the time, I found myself on the receiving end of an account for the vet’s fees from the spaniel’s owner plus an invoice for $100 for repairs to the fence caused by the bull terrier. I agreed to pay the vet’s fee but balked at paying for the fence. 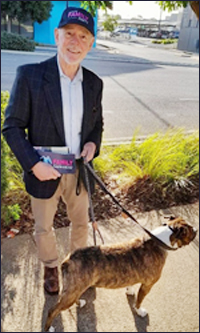 This incident came back to me last Saturday afternoon when I was asked to look after a voter’s bull terrier dog while its owner went in to vote at the Munno Para early voting centre in Adelaide’s north. Long-standing Family Party member and volunteer Roger Potger snapped the accompanying photo and dubbed it ‘Dog Day Afternoon’.

Tightly holding on to the dog, I was nervously on the lookout for any local spaniels. Fortunately, none appeared and I successfully handed the dog back to its owner – who I trust voted for me! You never can tell. I remember after my first election – which needless to say I didn’t win – I bumped into a voter who proclaimed excitedly, “I voted for you!” “Ah, you’re the one,” I replied, “I’ve been looking for you”. The amused voter chuckled and walked off unsure if I was joking or not.

I’m hoping this time will be different.

Still on the subject of dogs, in ‘The Adventure of Silver Blaze’, one of the Sherlock Holmes short stories by Sir Arthur Conan Doyle, Holmes is sent to investigate the disappearance – on the eve of an important race – of a champion racehorse called Silver Blaze and the murder of its trainer John Straker. In what has become a famous exchange known as ‘the curious incident of the dog in the night-time’ between Scotland Yard’s Inspector Gregory and Sherlock Holmes, Gregory asks Holmes, “Is there any other point to which you would wish to draw my attention?” “Yes”, Holmes replied, “To the curious incident of the dog in the night-time”. “But the dog did nothing in the night-time”, said Gregory. “That was the curious incident”, Holmes replied.

That the dog didn’t bark told Holmes the person who took the racehorse was known to the dog. The thief was not a stranger. It was an inside job.

This exchange has become symbolic of the need to speak up or ‘bark’ when something is amiss. Rest assured, here at the Australian Family Party we will not hesitate to bark.

For this election we have done the hard yards, put in the work, listed all our policies in great detail here, traversed the state with our campaign posters, negotiated good preference arrangements and handed out how-to-vote cards at early voting centres. These are our ‘five loaves and two fishes’. Whether God chooses to perform a miracle or not is up to Him. We have peace about it.

Across the globe, however, there is little in the way of peace. In fact, there is havoc. Shakespeare’s ‘dogs of war’ are growling and Australia will not escape at least some of this havoc.

Tomorrow – Saturday 21st May – is election day. Without wanting to labour the point, we can’t let our country go to the dogs. Click here to see how to vote to help prevent that from happening.